The most famous ancient civilizations

The most famous ancient civilizations 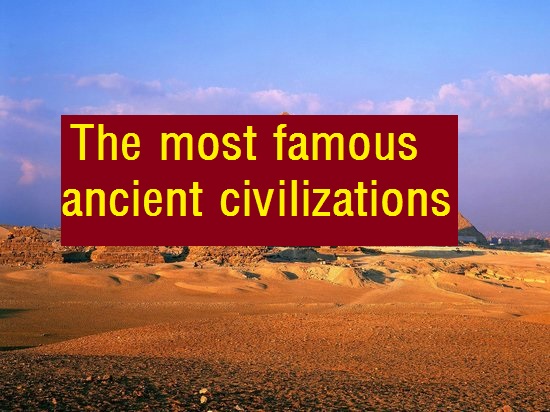 Instead of being wandering in deserts and mountains, the old man became part of traditions, literature, arts, architecture and science, and there became laws linking society and governing the relationship between them.

The civilized scenario has taken place in many parts of the ancient world, whether Asia, Africa or Europe, and since 3000 BC, various cultural expansions have begun to emerge throughout the world.

That civilization left existing architectural evidence to this day that spoke of their existence and the shape of life at the time and recalled that we had ancient ancestors who had been in that place for thousands of years.

What are the most famous ancient civilizations?

The world's most famous ancient civilizations:

A large number of people do not know about a civilization in Sudan that was called the Kush civilization or the ancient Nubian kingdom.

That kingdom had existed in upper and lower Nubia and around the banks of the Nile since 170 BC to 350 AD.

The ancient Kush inhabitants were called pharaohs of the South because they shared with the Pharaohs in Egypt a large number of customs and rituals.

They built the pyramids, buried their dead with them and worshipped some gods similar to pharaohs such as Amon and Isis.

The rulers of Koch are the guardians of religion and the state and those responsible for the temples, and nubia reached its greatest strength between the 4th and 8th centuries BC.

The empire expanded to the Mediterranean coast in the north and extended to the depths of Africa to the south and the Koch kings intervened in ancient Egypt for a century and a half.

They themselves are the kings of the 25th dynasty of the Pharaohs of Egypt and have built more than two hundred and forty pyramids in their capital.

The Incas are the largest empire established in North America before the Colombian era and before the European march of the North and South Americas.

It remained in place from 1100 AD to 1532, which built the Inca Empire, which was inhabited by Native Americans, including inca, Peru, Ecuador and part of Chile and Argentina.

Although the time period of the Incas is somewhat short, they have amazed the world with their achievements and civilizational heritage to the point where some people describe the Incas as coming from outer space.

During the few periods they were present before the European march, the Incas built vast and strange road networks to connect parts of the kingdom with each other.

They built bridges over water bodies to facilitate traffic, pyramids and terraces as they transported large stones from the mountains to the city in incomprehensible ways.

They established forts and warehouses, enjoyed agriculture and industry, and built their capital, Cusco, 12,000 feet above sea level.

It consisted of temples, castles, forts and, strangely, that city still exists today.

The Mayan civilization flourished in Central America since 2600 BC and they invented the calendar by which they determined that the beginning of the creation of the universe was on August 11, 3114 BC.

They predicted that the end of the world would be on December 21, 2012, but of course this day passed and the world did not end and the Mayan civilization took a rapid slope in foundation and prosperity.

The number of its citizens has reached more than 19 million and the Mayan people are among the most educated peoples in the ancient world and for our modern world.

The Mayans built huge temples and pyramids and are said to have built pyramids larger in size than the pyramids of Egypt.

But despite all this, civilization collapsed so suddenly during the 8th and 9th centuries that they suddenly disappeared.

Phoenician civilization is one of the ancient high civilizations that originated in the eastern Mediterranean in 2500 BC.
It included a large number of coastal areas in northern Palestine, Lebanon and southern Syria to the island of Arwad in the north.
Between 1500 BC and 300 BC, their civilization expanded significantly to the western Mediterranean and the Atlantic coast.
There were 25 cities belonging to Phoenician civilization, and the Phoenician people were interested in revitalizing the economy, agriculture, metal and glass industry and building large ships.
In 1050 BC, they founded their own 22-letter alphabet written from right to left, spread widely and
classified as the best alphabet in the ancient world.

The ancient state of Babylon was founded by King Hammurabi in 1763 BC and was a remarkably prosperous country in agriculture.
Babylon was the city with the oldest law known to mankind, consisting of 182 articles under the name of Hammurabi's law.
The story of Babylonian civilization begins the moment Hammurabi went to fight the worlds who had occupied Sumer and once he triumphed over them, he became the only ruler of Sumer.
Somer was annexed to Babylon to show Babylonian civilization strongly and their writing system, education, industry, irrigation and trade were developed.
Babylonian civilization eventually became an extension and development of civilization, once known as sumer civilization, and dazzled the world with great installations such as the hanging gardens of Babylon, one of the seven ancient wonders of the world.

Chinese civilization is one of the longest ancient civilizations witnessed by mankind, which remained preserved until very close to our contemporary history, specifically until 1912.
China's civilization has emerged on both sides of the Yellow River and since its emergence has left a distinctive mark on the cultural progress that has included architecture, military, industrial and agricultural power.
Huge achievements have been made to my present day, such as the Great Wall and the oldest written records in China's history dating back to 1250 BC during the Shang dynasty.
However, the emergence of Chinese civilization dates back to a period of time beyond specifically in 2070 BC, but it was an era that lacked writing and blogging.
Since then, the dynasties have successively followed through the ages to the end of the King dynasty, which ended because of the revolution that emerged in October 1911.
That revolution led to the end of 4,000 years of continuous Chinese civilization.

Ancient Greek or Greek civilization is one of the most famous ancient civilizations ever reported to have flourished between 1200 BC and 323 BC in the year of Alexander the Great's death.
He is one of the most famous leaders and conquerors in the history of Greece and even in the history of the whole world, and the period of greek civilization was a period full of scientific, political, philosophical and artistic achievements.
It left a cultural legacy unprecedented in any other Western civilization and added great contributions to various sciences, finding in mathematics Pythagoras, Euclid and sciences Thales, Aristotle and Socrates.
A large number of people are confused between The Civilization of Greece and the Romans, but they are two completely different civilizations, not a single civilization.

Ancient Rome is a civilization that emerged from an agricultural community that originated on the Italian peninsula in the mid-8th century BC and was a neighbour of Greece by the Roman state.
But at that time Greece was very superior in all areas and because of the connection of the two civilizations in southern Italy, Roman civilization began to be influenced by Greek civilization.
The Greeks had great credit to the Romans for providing them with heritage, science and religious beliefs as well as the cultural mix of literature and culture.
Hence the true beginning of the Romans, who established a civilization that spanned fifteen centuries and became one of the largest empires of the ancient world.
Roman civilization was able to outperform Greek civilization itself and controlled most of Europe, Greece, Egypt, Syria and the Mediterranean basin through military invasion.
Cultural relics were left, but the empire gradually faded before the armies of the Islamic Empire until Constantinople fell by the Ottoman Empire in 1453.

Egyptian civilization is a civilization that extended from 3150 BC to 50 AD and pharaonic civilization was established on land stretching from the Mediterranean coast to Aswan to the south.
From the Sinai Peninsula to the west, siwa oasis was based on fishing, textile industry, papyrus and agriculture, particularly in the Nile Basin region.
Throughout the ages, Egyptian civilization has witnessed great urban progress and has been renowned for its engineering, medicine and chemistry and has been ruled by a large number of families.
Some of them were based on polytheism, sunflowers and others based on monotheism.
In the end, ancient Egyptian civilization provided unparalleled historical imprints of pyramids that still exist to this day, mummy, mummies, solar calendar, hieroglyphics, obelisks and temples.
All of them are achievements that speak to tell us that there was a great civilization that existed in this place one day and some secrets have remained difficult so far to achieve some of them or to solve their secrets.
Edit This Article
Tags civilizations

Babylon ancient civilization. How did the empire rise and how did it fall?

Babylon ancient civilization. How did the empire rise and how did it fall? Babylon is one of the first civilization centers in the world, a...

The most important characteristic of ancient Japanese civilization

What do you know about the Bengali civilization

What do you know about Greek civilization?

Babylon ancient civilization. How did the empire rise and how did it fall?

The Best Ways to Get the Lowest Life Insurance Quotes

How To invest in The Saudi Arabia Stock Exchange now